skip to main | skip to sidebar

To peg is not to hold

It is often assumed that a country which pegs its currency to another must intervene in that currency pair to fix their exchange rate, and will therefore hold foreign exchange reserves in the peg currency for that purpose. This presumably explains why, although US Treasury Secretary Paulson has urged China to change its exchange rate policy (a crawling peg to an apparently currency basket), he has accepted the Gulf Cooperation Council (GCC) countries’ pegs to the dollar. In both cases, the weakening of the US economy which led to easier monetary policy and incipient dollar depreciation has obliged the pegging countries to buy a lot of dollars. These dollars are invested in dollar securities, especially bonds, and held in those countries’ foreign exchange reserves (or, in a growing number of countries, their sovereign wealth funds). While this has had the welcome (since the credit squeeze began at least) effect of holding down US bond yields and hence mortgage rates, the US authorities would have liked the Chinese to let the renminbi appreciate against the dollar, since many Chinese exports, such as steel, compete with American products to some degree. By contrast, the US does not produce as much oil as it requires and has actively called for more oil from the GCC countries, and oil is generally priced in dollars anyway, so Paulson would prefer US mortgage rates to be reduced by reserve accumulation by GCC countries rather than by China. In fact however, unless the exchange rate regime is a rigid fix in the form of a currency board (where by definition the domestic currency is fully backed by holdings of the peg currency), currency intervention need not involve the peg currency at all, as this post explains.

The mechanism by which intervention affects the two currencies involved may be understood by analogy to a physical system governed by Newton’s third law of motion “every reaction has an equal and opposite reaction”, such as the boats on an ocean shown in Figure 1. 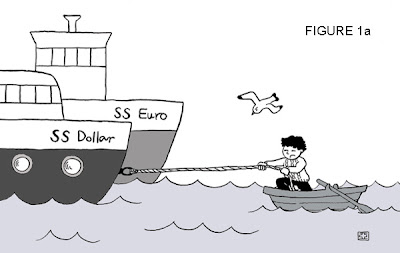 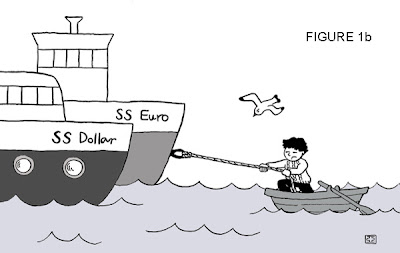 The boats represent currencies, and the distance between any pair represents their relative value or exchange rate. The position of any boat on the sea represents the wider value of the corresponding currency relative to all other currencies (and indeed anything else that the currency can buy, including goods and services). By pulling or pushing against another vessel, a sailor in one boat can shift its position relative to the other, just as trading between two currencies can affect their exchange rate. Consistent with Newton’s third law, applying a force on one boat from another will also shift their absolute positions on the sea, by an amount for each boat that is inversely proportional to its mass. If a light boat such as a dinghy pulls on a heavy ship, for any given change in their separation, the absolute position of the dinghy moves further than that of the ship. Here, the mass of a boat is analogous to the total volume of transactions in a currency; if a currency is heavily traded, a foreign exchange transaction of given size accounts for a small fraction of the market turnover involving that currency and can therefore be expected to have proportionately little impact on its overall exchange value.

Typically, a currency peg involves fixing a minor - ie comparatively lightly traded - currency to a major one like the US dollar. This means that intervention to maintain the peg works mainly by changing the exchange value of the minor currency and has relatively little effect on the overall value of the major currency. A corollary is that the peg could be operated almost as effectively via foreign exchange transactions against another major currency to which the minor currency is not pegged. To use the boat analogy, a sailor in a dinghy wanting to move towards, say, the SS Dollar (Figure 1a) could move almost as far towards the SS Dollar by pulling against another large ship lying alongside it, such as the SS Euro (Figure 1b). The practical implication is that it is not necessary to deal in, and therefore not necessary to hold, assets denominated in a particular currency in order to peg to that currency, although it would be most efficient (in terms of the volume of transactions required) to deal against the peg currency, especially if it is not far more heavily traded than the pegged currency.

There could be various reasons why a country that pegs its currency to another might not want to deal in or hold that currency in its reserves. One explanation might be that the peg currency is not freely traded on the foreign exchange market (ie it is not fully convertible). This may be the case when the peg currency is that of a key trade partner such as a neighbouring country and is itself a minor currency. It could be preferable to hold assets denominated in currencies for investment motives, such as because they are expected to offer a higher return, more stable value, or greater liquidity than the assets available in the peg currency. Another reason might be that a country’s foreign exchange reserves serve several purposes, and the other purposes are better served by holding a currency other than the peg currency.

The relevance of this discussion to the present international macroeconomic situation is that, if, in the light of the apparent willingness of the US Federal Reserve to jeopardise the value of the dollar by keeping interest rates low to stimulate economic activity and by taking on large contingent liabilities like those incurred in the rescue of Bear Stearns, countries fear a sharp depreciation of the dollar and a consequent loss on their reserves, they can cap or even reduce their exposure to the dollar without relinquishing their dollar pegs. Ironically, because the GCC countries' currencies are lightly traded, the necessary changes in intervention strategy (ie somewhat more active intervention, against a different major currency, most likely the euro) would be easier for them to make than for China.
Posted by RebelEconomist at 13:39

What's your take on the line taken by some GCC central bankers that their inflation is not caused by loose monpol, but rather by local property markets?! That, to me, conveniently seems to ignore the effect of negative real rates on the price of real assets.

Not being a close follower of the GCC economies myself, I had not heard that argument, but it sounds diametrically wrong to me. The quantity theory of money would suggest that, if a country's money supply did not change at all, rising property prices would have to be offset by a fall in some other prices, in which case there would be no overall inflation. However, assuming that, as in most countries, property prices per se are not included in the official inflation index (ie since CPIs are designed to measure the cost of current consumption and exclude investment for future consumption, property expenditure is usually represented by imputed rent), that would mean that rising property prices would actually be associated with falling consumer price inflation! In short, property price and consumer price inflation cannot coexist unless money supply is allowed to expand. And, assuming that domestic monetary policy is not entirely subordinated to the exchange rate peg, money supply is controlled by the central bank.

Thank you. That argument (which I consider specious) was put forward by a GCC CB governor! I'll see if I can find the story; IIRC it originally appeared on Bloomberg.

A lot of words to make a specious analogy.

RebelEconomist
RebelEconomist is a regular reader of, and occasional commenter on, more illustrious economic blogs. The main purpose of this blog – initially at least – is to convey ideas that need more explanation than could reasonably be included in a comment or that have not been raised by discussion elsewhere. RebelEconomist has been an academic, central banker and fund manager in his time, but the ideas presented here should stand on the strength of the supporting logic and evidence rather than the author’s credentials. Hopefully, some of the ideas are original, in which case, RebelEconomist would be grateful if readers who use them would acknowledge their source.