skip to main | skip to sidebar

A pictorial comparison of QE in Japan and the US/UK

See paragraphs 27 to 40 of the previous post. In a nutshell, in its quantitative easing period from 2001 to 2006, the Bank of Japan focused on creating a certain quantity of reserves, and largely allowed the market to determine how this should support the price of less liquid and less creditworthy debt (although the BoJ did buy more long term JGBs in its rinban operations than usual, and also made some token purchases of commercial paper and equities). The Fed, and to a lesser extent the BoE, are, by contrast, targeting their asset purchases on particular markets in which they are not normally buyers, notably the markets for and some other securities, and creating reserves as a that the banks are content to hold because it bears some interest. 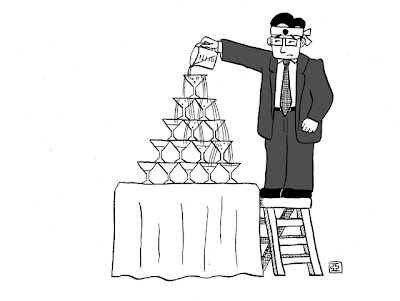 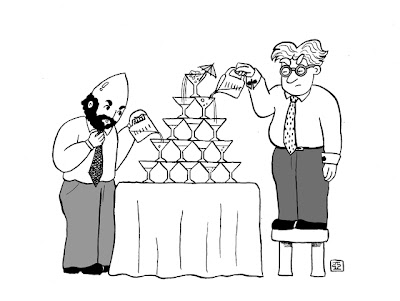 In an incisive comment on this picture posted on the excellent Worthwhile Canadian Initiative blog, Nick Rowe noted that, since an increase in money supply is believed to eventually lead to an rise in prices across the entire economy (see paragraph 5 of the previous post), the glasses ought to be on a level, connected by straws. That’s right, but then a viscous fluid (like maple syrup) would be needed to represent the time taken for the money injected to spread through the economy, and viscosity is hard to represent in a picture. I guess analogies are rarely perfect!
Posted by RebelEconomist at 09:49

I like the way you have portrayed the things you want to say through pictures, that too the comparing the QE in Japan and UK/US.

RebelEconomist
RebelEconomist is a regular reader of, and occasional commenter on, more illustrious economic blogs. The main purpose of this blog – initially at least – is to convey ideas that need more explanation than could reasonably be included in a comment or that have not been raised by discussion elsewhere. RebelEconomist has been an academic, central banker and fund manager in his time, but the ideas presented here should stand on the strength of the supporting logic and evidence rather than the author’s credentials. Hopefully, some of the ideas are original, in which case, RebelEconomist would be grateful if readers who use them would acknowledge their source.